The Battle of Badr (Arabic: غزوة بدر), fought March 17, 624 C.E. (17 Ramadan 2 AH in the Islamic calendar) in the Hejaz of western Arabia (present-day Saudi Arabia), was a key battle in the early days of Islam and a turning point in Muhammad's struggle with his opponents among the Quraish[1] in Mecca. The battle has been passed down in Islamic history as a decisive victory attributable to divine intervention or the genius of Muhammad. Although it is one of the few battles specifically mentioned in the Muslim holy book, the Qur'an, virtually all contemporary knowledge of the battle at Badr comes from traditional Islamic accounts, both hadiths and biographies of Muhammad, written decades after the battle.

Advancing to a strong defensive position, Muhammad's well-disciplined men managed to shatter the Meccan lines, killing several important Quraishi leaders including Muhammad's chief antagonist, 'Amr ibn Hishām. For the early Muslims, the battle was extremely significant because it was the first sign that they might eventually defeat their enemies in Mecca. Mecca at that time was one of the richest and most powerful pagan cities in Arabia, which fielded an army three times larger than that of the Muslims. The Muslim victory also signaled other tribes that a new power had arisen in Arabia and strengthened Muhammad’s authority as leader of the often fractious community in Medina. Local Arab tribes began to convert to Islam and ally themselves with the Muslims of Medina; thus, the expansion of Islam began.

At the time of the battle, Arabia was sparsely populated by a number of Arabic-speaking peoples. Some were Bedouin; pastoral nomads organized in tribes; some were agriculturalists living either in oases in the north or in the more fertile and thickly settled areas to the south (now Yemen and Oman). The majority of Arabs were adherents of numerous polytheistic religions. There were also tribes that followed Judaism, Christianity (including Nestorianism), and Zoroastrianism.

Muhammad was born in Mecca around 570 C.E. into the Banū Hāshim clan of the Quraish tribe. When he was about forty years old, he is said to have experienced a divine revelation while he was meditating in a cave outside Mecca. He began to preach to his kinfolk first privately and then publicly. Response to his preaching both attracted followers and antagonized others. During this period Muhammad was protected by his uncle Abū Tālib. When his uncle died in 619, the leadership of the Banū Hāshim passed to one of Muhammad's enemies, 'Amr ibn Hishām,[2] who withdrew the protection and stepped up persecution of the Muslim community.

In 622, with open acts of violence being committed against the Muslims by their fellow Quraishi tribesmen, Muhammad and many of his followers fled to the neighboring city of Medina. This migration is called the Hijra and marked the beginning of Muhammad's reign as both a political as well as a religious leader. 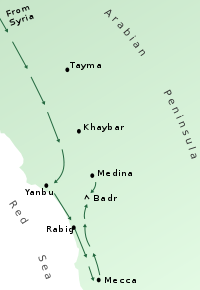 A map of the Badr campaign.

Prior to the battle, the Muslims and Meccans had fought several smaller skirmishes in late 623 and early 624, as the Muslim ghazawāt had become more frequent. Badr, however was the first large-scale engagement between the two forces. In the spring of 624, Muhammad received word from his intelligence sources that a trade caravan, commanded by Abu Sufyan and guarded by thirty to forty men, was travelling from Syria back to Mecca. The caravan was funded with the money that the Muslims had left behind in Mecca before their departure for Medina. The Quraysh sold all their belongings and used the money to fund this caravan in order to mock the Muslims. Muhammad gathered an army of 313 men, the largest army the Muslims had put in the field yet.