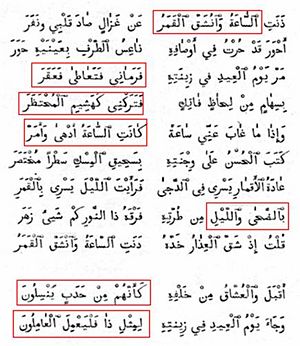 The Arabic text of the Poem of Imru al-Qays. Red verses are found word for word in the Qur'an.

Ameru' al-Qays, or Imru'u al Quais, Ibn Hujr Al-Kindi, Arabic (امرؤ القيس بن حجر بن الحارث الكندي), was a celebrated pre-Islamic Arabian poet of the sixth century, circa 500-535 C.E. and the author of one of the Muallaqat, an anthology of Arabic literature attributed to seven famous poets.

Reputedly, al-Qay's poetic skill was praised by Muhammad and by such early Muslim leaders as Ali[1] but he was also the subject of condemnation because of the content of his work. Muhammad Non-Muslim scholars have argued that the Qur'an borrows from al-Qays’ poetry, a charge that Muslims strongly refute. However, he helped shape the literary style in which the Qur'an is written. Love poetry, too, continued to be written, especially by the Sufis and his thematic influence can be identified.

Al-Qays was the son of Hujr, the last king of Kindah which is part of the present Republic of Yemen. He was born around 501 and died around 544. His mother was Fatmah bint Rabi’ah the sister of Kulib and Al-Muhalhl, two of the well known, Arabic tribe leaders. Imru’ al-Qais was named after Imru’ al-Qais Ibn Aban, who was a close friend of his uncle al-Muhalhl. His reputation for writing erotic poems resulted in his banishment from court on two occasions, when he became a wondering minstrel. His father was assassinated by the Banu Asad, a rebel tribe whose leader usurped the throne. Qays pledged revenge, although he never succeeded to the throne. That is why Arabs called him al-Malek-al-Delleel or the Shadow King. He continued to seek help from tribe to tribe until he was introduced to the Emperor, Justinian I. The Emperor provided assistance but is also rumored to have had al-Qays poisoned because he seduced one of the imperial princesses.

Al-Qays loved wine to such an extent that when he was informed of his father’s death while drinking, he shocked every one around him by his response when he said “Tonight is for drinking and tomorrow we will see what the matter is.” It is believed that he avenged his father, although their relationship was not good enough.

He wrote passionate love poetry, and is believed to have invented the Qasida, or classical Arabic ode. He wrote one of the famous “seven odes” in the work known as Al-Mu'allaqat. This means “hung” and it is said that the poems “hung in the pagan shrine of the Ka’ba in Mecca.”[2]

In Translation, an example of his poetry are the opening stanzas of "The Poem of Imrul-al-Qays, “Stop, of my friends”:

Stop, oh my friends, let us pause to weep over the remembrance of my beloved.
Here was her abode on the edge of the sandy desert between Dakhool and Howmal.

The traces of her encampment are not wholly obliterated even now.
For when the South wind blows the sand over them the North wind sweeps it away.

The courtyards and enclosures of the old home have become desolate;
The dung of the wild deer lies there thick as the seeds of pepper.

On the morning of our separation it was as if I stood in the gardens of our tribe,
Amid the acacia-shrubs where my eyes were blinded with tears by the smart from the bursting pods of colocynth.[3]

Nay, they say [Muhammad has had] the most involved and confusing of all dreams! Nay, he has invented all of this. Nay, he is only a poet…

Several hadith condemn poetry, such as

The Prophet said, "It is better for a man to fill the inside of his body with pus than to fill it with poetry."[4]

However, some hadith recognize that not all poetry is unacceptable, such as:

Allah's Apostle said, "Some poetry contains wisdom."[5] However, says Mostyn, if such pre-Islamic poetry as that of al-Qays was “considered by many Arabs as unsurpassable,” these poets were “condemned by the Prophet as the ‘poets of hell-fire” because of their paganism and decadence.”[6] Esack (2005) writes that the Qur’an is “relentless in its denial that it is not poetry and of any suggestion, indeed accusation, that there was a relationship between Muhammad and professional soothsayers and singers…that were characteristic of Meccan society at that time" (71). Similarity between Imrul al-Qays's poem and Q54:1, 54:29, 54:31, 54:46, 93:1-2, 21:96, 37:61 has been pointed out. Sections in red in the image at the top of this page are found word for word in the Qur'an. Ayman argues that the poems were actually written after the time of Muhammad, and back projected to the pre-Islamic period. The fact that words from the Qur'an appear to be the same as those in another text does not concern many Muslims. Since the Qur'an was revealed in Arabic which already existed as a spoken and written language, it is not surprising if some combinations of the words God chose to use had already been used by others, just as the words of the language as a whole were used. In his view, "the most prominent Jahiliya poet, Imru' Al-Qays is a fictional character based on a much earlier real Arab king"[7] Muhammad was also the but of satirical poets, who were the equivalent of political commentators at the time. This was another reason why he expressed dislike of poetry. Incidents surrounding the fate of some of these poets have long preoccupied critics of Islam. Some posit that Islam discourages the creative imagination.

The charge that Muhammad copied parts of the Qur’an from al-Qays, made by various Christian writers, is refuted by Muslims. Masood (2001) cites a tradition that has the grand daughter of al-Qays recognize some of his poetry: Four verses from one of his (i.e., Imraul Qais') poems also appear in the Qur'an (Surah 54:1,29,31,46). It is said that when Imraul Qais' granddaughter heard the Surah recited aloud, she immediately recognised the poem and demanded to know how these verses had become part of Muhammad's revelation.[8] Writers such as M. S. M. Saifullah and Muhammad Ghoniem refute that Muhammad, or any other person, composed or compiled the Qur’an, the language of which Muslims take to be wholly divine, and inimitable, a stylistic, unrepeatable miracle.[9]