April Fools' Day or April Fool's Day (sometimes called All Fools' Day) is an annual custom on April 1, consisting of practical jokes and hoaxes. The player of the joke or hoax often exposes their action later by shouting "April fool'" at the recipient. In more recent times, the mass media may be involved in perpetrating such pranks, which may be revealed as such the following day. Although this tradition is long-standing around much of the world, the day is not a public holiday in any country.

Opinions are somewhat divided about whether such practices are beneficial or harmful. Laughter is good for the individual, and the coming together of the community in laughter also has a beneficial impact. However, there is a danger that the public can be misled in unfortunate and even dangerous ways by well-presented hoaxes, and the perpetrators have a responsibility to ensure public safety so that the occasion can remain joyous. 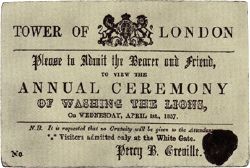 An 1857 ticket to "Washing the Lions" at the Tower of London in London. No such event ever took place.

Despite being a well established tradition throughout northern Europe to play pranks on April 1, thus making "April Fools," there is little written record that describes its origin.[1]

One idea is that it derives from joyful celebrations of the coming of spring. In this context, some have suggested a connection with the Greco-Roman festival called "Hilaria" which honored Cybele, an ancient Greek Mother of Gods, and its celebrations included parades, masquerades, and jokes to celebrate the first day after the vernal equinox.[2]

A disputed association between April 1 and foolishness is in Geoffrey Chaucer's The Canterbury Tales (1392). In the "Nun's Priest's Tale", a vain cock Chauntecleer is tricked by a fox on Syn March bigan thritty dayes and two. Readers apparently understood this line to mean "32 March," which would be April 1. However, it is not clear that Chaucer was referencing April 1, since the text of the "Nun's Priest's Tale" also states that the story takes place on the day when the sun is in the signe of Taurus had y-runne Twenty degrees and one, which cannot be April 1. Modern scholars believe that there is a copying error in the extant manuscripts and that Chaucer actually wrote, Syn March was gon.[3] If so, the passage would have originally meant 32 days after March, or May 2.[1]

The most popular theory about the origin of April Fool's Day involves the calendar reform of the sixteenth century, which involved changing from the Julian calendar, introduced by Julius Caesar, to the Gregorian calendar named for Pope Gregory XIII. This moved the New Year from March to January 1. Those still using the Julian calendar were called fools and it became customary to play jokes on them on April 1. However, there are inconsistencies with this idea. For example, in countries such as France the New Year celebrations had long been held on January 1. In Britain, the calendar change occurred in 1752, by which time there was clear written record of April Fools Day activities already taking place.[1]

The sixteenth century records evidence of the custom in various places in Europe. For example, in 1508, French poet Eloy d'Amerval referred to a poisson d'avril (April fool, literally "fish of April"), possibly the first reference to the celebration in France.[4]

In 1561, Flemish poet Eduard de Dene wrote of a nobleman who sent his servants on foolish errands on April 1. The closing line of each stanza contains the line: "I am afraid... that you are trying to make me run a fool's errand."[1]

By the late seventeenth century there are records of the day in Britain. In 1686, John Aubrey referred to the celebration on April 1 as "Fooles holy day," the first British reference. It became traditional for a certain prank to be played on April Fool's Day which involved inviting people were tricked to go to the Tower of London to "see the lions washed." The April 2, 1698 edition of Dawks's News-Letter reported that several people had attended the nonexistent ceremony.[1]

In the United Kingdom, April Fool pranks have traditionally been carried out in the morning. and revealed by shouting "April fool!" at the recipient.[5] This continues to be the current practice, with the custom ceasing at noon, after which time it is no longer acceptable to play pranks. Thus a person playing a prank after midday is considered the "April fool" themselves.[6]

Traditional tricks include pinning notes which would say things like "kick me" or "kiss me" on someone's back, and sending an unsuspecting child on some unlikely errand, such as "fetching a whistle to bring down the wind." In Scotland, the day is often called "Taily Day," which is derived from the name for a pig's tail which could be pinned on an unsuspecting victim's back.[7]

April Fools' Day was traditionally called "Huntigowk Day" in Scotland.[5] The name is a corruption of 'Hunt the Gowk', "gowk" being Scots for a cuckoo or a foolish person; alternative terms in Gaelic would be Là na Gocaireachd, 'gowking day', or Là Ruith na Cuthaige, 'the day of running the cuckoo'. The traditional prank is to ask someone to deliver a sealed message that supposedly requests help of some sort. In fact, the message reads "Dinna laugh, dinna smile. Hunt the gowk another mile." The recipient, upon reading it, will explain he can only help if he first contacts another person, and sends the victim to this next person with an identical message, with the same result.[5]

In Italy, France, Belgium, and French-speaking areas of Switzerland and Canada, the April Fools' tradition is often known as "April fish" (poisson d'avril in French, april vis in Dutch, or pesce d'aprile in Italian). This includes attempting to attach a paper fish to the victim's back without being noticed.[8] Such fish feature is prominently present on many late nineteenth- to early twentieth-century French April Fools' Day postcards.

First of April in Ukraine

April Fools' Day is widely celebrated in Odessa and has special local name Humorina. An April Fool prank is revealed by saying "Первое Апреля, никому не верю" (which means "April First, trust nobody") to the recipient. The history of the Humorina Odessa carnival as a city holiday begins in 1973, with the idea of a festival of laughter.[9]

The festival includes a large parade in the city center, free concerts, street fairs, and performances. Festival participants dress up in a variety of costumes, particularly clowns, and walk around the city fooling passersby.[10]

As well as people playing pranks on one another on April Fools' Day, elaborate pranks have appeared on radio and TV stations, newspapers, and websites, and have been performed by large corporations.

The practice of April Fool pranks and hoaxes is controversial.[6] The mixed opinions of critics are epitomized in the reception to the 1957 BBC "Spaghetti-tree hoax," in reference to which, newspapers were split over whether it was "a great joke or a terrible hoax on the public."[29]

The positive view is that April Fools' can be good for one's health because it encourages "jokes, hoaxes...pranks, [and] belly laughs," and brings all the benefits of laughter including stress relief and reducing strain on the heart.[30] There are many "best of" April Fools' Day lists that are compiled in order to showcase the best examples of how the day is celebrated.[31] Various April Fools' campaigns have been praised for their innovation, creativity, writing, and general effort.[32]

The negative view describes April Fools' hoaxes as "creepy and manipulative," "rude," and "a little bit nasty," as well as based on schadenfreude and deceit.[33] When genuine news or a genuine important order or warning is issued on April Fools' Day, there is risk that it will be misinterpreted as a joke and ignored. On the other hand, sometimes stories intended as jokes are taken seriously. Either way, there can be adverse effects, such as confusion, misinformation, waste of resources (especially when the hoax concerns people in danger), and even legal or commercial consequences.